Nidhoggr is a Fighter featured in Bleeding Edge.

When a musically gifted child named Steiner Foss grew tired of classical music and the world around, his sombre state would guide him to greatness.

At an accidental discovery of an illegal concert, buried deep under a rotting cannery district in a corner of Norway, the young Steiner became beautifully horrified. It was here that his journey to international fame and success would begin, as the Death Metal icon now known as Níðhöggr. Now a modified man, rich in anti-authoritative motives, this beacon of blackness and musically driven augmentations bombards the ears of the world with the anthems of empirical end. 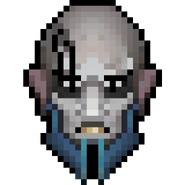 Níðhöggr Trailer Bleeding Edge
Add a photo to this gallery
</div>
Retrieved from "https://bleedingedge.fandom.com/wiki/Nidhoggr?oldid=1228"
Community content is available under CC-BY-SA unless otherwise noted.