Makutu is a Fighter featured in Bleeding Edge. A soft-spoken gentle giant of a Maori New Zealander, he was once the proverbial runt of the litter in his family of large athletes. Wishing to become big and strong like his rugby-playing siblings, he received his family's blessing and underwent augmentation, fitting a large ball in his torso and becoming a giant of a man. His newfound physical strength expanded his hobbies and contributions to society, but his mild nature forced him to always hold back, fearing his own strength and what it might do if something went wrong. He would find solace and comfort in the mismatched cyberized arms of the "Bleeding Edge" gang, who finally gave him an opportunity to stop holding back and use his full power.

As the only child of his mum’s second marriage and the youngest of 7 step brothers and sisters, Makutu always felt a little bit left out. Not because they didn’t love him to bits, but because while they were all tall, strong and athletic; he was so very small.

He loved to train in meditation with his Dad, and he could school them all at fighting games or ping-pong, but all he really wanted was to be big, and tough, and play rugby, like his siblings. So at age 16, with the support of his family, Makutu underwent augmentation.

Makutu loved his new body. He felt like it finally matched his inner self. He’d go to the gym to pump iron, help out in the community, and of course, play rugby. But he always felt himself holding back, worried about hurting his friends or teammates. He needed a new way to test himself. A place to unleash his full unbridled strength.

"A survivable front-liner with unique stances who excels at disrupting and engaging."

Makutu is a big-body tank who sets the pace of a fight by throwing his weight around to shove enemies this way and that, paired with special attacks that let him do surprising damage and provide additional control. With his two stances providing a passive boon he can switch between at any time, with an opportunity to temporarily boost those boons and share them with nearby allies, this Maori moves at his own pace and carries everyone else along for the ride.

Makutu's special passive, in place of being unable to Evade or Parry, is to use the <Evade> button to switch between two special stances: Pepeke Stance to boost his speed, good for engaging or disengaging, and Ora Stance for passive health regen, to quietly keep him topped up while out of a fight and staying in a fight for just a little longer. He can temporarily boost the effect of his active stance and share it with nearby allies thanks to Leg-It/Healthy, providing a bit of his own friendly support where he can. His other specials provide hard crowd control, the aforementioned "throwing his weight around." Barge lets him shoulder tackle any enemy(s) in his way and carry them with him, preferably into a wall for extra damage and a stun. Repellent does a bit of damage and shoves away all nearby enemies for when he needs to clear space, maybe to free up a capture point or clear a path for himself or an ally to escape. All this control, combined with his stance passives, helps complement his survivability by way of sheer mass and toughness: he has natural super armor and doesn't flinch against basic attacks, and he has the single largest native health pool in the game (tied with Buttercup). Makutu is not without damage, either, thanks to his Fist Fight basic melee combo and especially the special hold inputs for those melee attacks, throwing a barrage of hands for surprising damage or launching an enemy into the air for damage and even more crowd control by carrying them into the air with him, where he can knock them away with a light air attack or splash them back to earth with a heavy air attack. Makutu's choice of super lets him decide if he wants more crowd control or raw survivability for himself and his friends: Katamaori!!! for the former to shove enemies around with a bit of damage, or Can't Touch Us! for the latter for flat invulnerability for a few seconds. 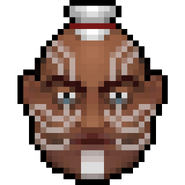