Gizmo is a Fighter featured in Bleeding Edge. Born in a small yet venerable mining town in the Australian Outback, her upbeat curiosity and technical genius were realized and fostered incredibly early. As a bright young sparkplug of an engineer and mechanic, she built her own robots and gadgets and cybernetics and even won competitions for them, all while still in grade school. Her potential for greatness quickly outstripped the means of her little desert home, and it wasn't long for her to realize this herself. Barely a teenager, she packed up and left home, eventually finding her way to New York. At just 16 years old, she found and fell in with the "Bleeding Edge" gang, a conclave of techheads, hackers and free thinkers who both shared and encouraged her passion and unbridled enthusiasm. It is here, amongst her dearest of friends - her new family - and in the heat of the fight clubs, that she intends to build her legend.

Hailing from an industrial mining town in New South Wales, Australia, Gizmo was a child prodigy and mechanical genius. She cobbled together her first robot from scrap and junk-tech before her 10th birthday, and by her early teens she was building black market cyberware and winning mech-fight contests before she was old enough to drive.

Determined to leave her small-town roots behind, Gizmo struck out to explore the world and along the route, she found her peers in the free hackers and gear-heads of Bleeding Edge.

Relishing the challenge of the arena, Gizmo used her skills to create a powerful mecha-suit for herself and a suite of fearsome weapons that let her control the battleground and hobble her challengers. Packing a whole lot of firepower in a small package, Gizmo's opponents underestimate her at their peril...

On the edge of Australia, in a sweltering mining township, a father’s heart melted when young Molly Gibson was born.

He would call her Gizmo, and walk the earth for her, and she would follow each footstep. The happy and curious Molly would soon emulate his engineering and construction skills, scavenging junk-tech to invent and build endlessly, with sometimes silly but highly functional designs.

At 13 she would win a prestigious bot-battle competition, thanks to the Skeleton Key. And then came the self-augments, along with her Father’s unbreakable realisation: Gizmo was destined for greater things. And so he sent her to New York, the tech mecca, to build her legend and find the Bleeding Edge.

"A long range gunner who utilizes turrets and gadgets to control the battlefield."

Gizmo, as a ranged damage dealer, is a one-girl machine gun nest. With the roaring fire of her bolt minigun revving up, flanked by turrets, dropping bombs, and even bouncing to safety when the time comes, the Australian gearhead shines when it comes to point control and suppressing fire, cutting down anyone who leaves her alone long enough and helping scare away anyone who tries to challenge her team's position, unless the enemy takes the effort to try and charge her nest directly. No matter what they try, this girl genius will be sure to make their lives hell for the effort.

Arguably Gizmo's main attraction is her primary weapon: the GG Gun itself. A bolt gun that ramps up its fire rate the longer she holds the trigger, this provides consistent long-range damage on anyone even vaguely in her area. As the gun spins up and puts more bolts downfield, her damage becomes incredibly difficult to ignore if not addressed, as an unharrassed Gizmo will cut down almost anyone given the opportunity. Between the nature of the GG Gun and her friendly T-RUT turrets to provide extra fire and protection in an area, combined with her average stamina, she strongly favors a stationary playstyle: get into position - preferably at elevation so she can fire down at her targets with minimal interruption, set up her turrets and spin up her gun, and get to work. She moves slower while firing, and the GG Gun is only really fearsome at top RPMs, so forcing her into a running gunfight is very annoying for her. She'll avoid moving if she doesn't have to. Outside of her gun, her Sucka bomb is just as crucial to master, providing good ranged AoE damage and crowd control to let her bunch up her targets, keep them from running away, or cause pursuers to trip if she drops it at her feet while on the run. The GG Gun and Sucka bomb will typically be the most reliable sources of her damage and how she controls much of her space. If the Aussie really needs to beat feet or otherwise just wants a quick and easy way to get to high ground, her Bouncer pad rounds out her kit and gives her (and her allies) the height and distance she needs to clear most ledges on her own, and many times, elevation is all she needs to escape to safety - or start firing her gun and dropping bombs all over again. Positioning is very important for her given her limited mobility, so making sure she's in the right place and ensuring she has at least one reliable escape route is crucial for survival.

Gizmo's supers let her choose how she wants to boost her firepower. The Rock-It! has her straddling an explosive warhead that grows in damage and speed the longer it flies; when set up properly, it becomes a powerful nuke that can turn a team fight on its head with its massive damage and knockdown, but by its very nature, it leaves her in relatively close proximity to her enemy(s), where she generally doesn't want to be. She'll use the Rock-It! if she wants to ensure a potential kill, provided she can zero in on a target at (possibly) extreme range. Alternatively, the Mini Mech provides more sustained, general purpose firepower and survivability. Mounting into her mech, "Kitty", gives Gizmo hefty armor, a max-RPM GG Gun, and a special flamethrower that spews fire all over her enemies for damage and an additional burning effect for %-health damage, great for melting bigger targets down, if not all targets. If Gizmo ever wants to experience what it feels like to be a close-to-mid range juggernaut, then strapping into her Mini Mech is the way to go. 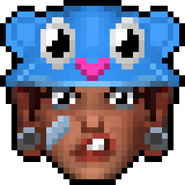