El Bastardo is a Fighter featured in Bleeding Edge. "The Bastard" is an old one-eyed Mexican guerrero - warrior - of mysterious origin and legend, his stories known almost solely to him alone. Hooked up to a life support system he totes on his back and wielding dual machetes, he joined the "Bleeding Edge" gang of cybernetic misfits with what appears to be a death wish. He competes in the underground pit fights intending to go out on his own terms, not wasting away in his twilight years hooked up to a failing life support system.

No one knows the dark past of the embittered, grim mercenary called as El Bastardo; only fragments of this lone wolf’s story - halftruths and rumors - exist. Some say he was the illegitimate son of an important politician, abandoned to the streets as a child; others that he is the product of a dangerous experiment gone awry; or that he was once a decorated soldier left for dead by his own commanders and is now out for revenge.

Only one thing is certain; those who cross him in the arena must face a lethal whirlwind of blades and an unstoppable fighter who acts without pity or mercy.

His past a mystery, he now seeks a chance to go out in a brutal blaze of glory before the machines keeping him alive can no longer support him...

[Note: previous versions of the story included rumors he was the illegitimate son of a cartel sicario - an assassin; or that he roamed the Mexican streets as a one-man-army vigilante.]

"An aggressive bruiser, who relies on defensive shields generated by attacking enemies."

El Bastardo is an aggressive dive tank whose survivability is tied directly to his relentless damage output. With strong gap closers and consistent damage, he lays the hurt on enemies while generating his own armor to stay on the front line even longer. He doesn't have much in the way of direct crowd control, but he makes up for it by charging a target and never letting up on his offense. The old mercenary holds the line by carving a path through anyone who gets close.

For El Bastardo's survivability, the name of the game is "damage for armor." His Life Support passive gives him armor - additional temporary HP atop his base health and super armor against flinching - as he does damage with any of his non-super attacks. This covers everything from hacking up enemies with his dual Machetes, to diving a target of opportunity (even a level above him) for a stun with Leap of Faith, to becoming a whirling dervish slicing any and all enemies even vaguely close to him with his relentless Death Spiral, to stealing health from all enemies surrounding him in a quick burst with Empower. All that armor, even if it naturally degrades or gets chopped up by enemies, will always be in supply as long as he never stops doing damage. He otherwise can't heal himself, but that's what friends and power-ups are for. He picks a target - preferably someone who can't get away easily - and dives them to cut them down to size. If he absolutely needs to make a retreat, an untargeted Leap of Faith and his high stamina help him get away, while Death Spiral and Empower further discourage pursuers with close-range damage. El Bastardo's choice of super lets him choose whether to lean harder on his undying defense or unceasing offense. Unbreakable dumps his armor into his Life Support and makes him unkillable for several seconds - even longer as long as he keeps doing damage during the duration - and rewards him with bonus armor as compensation when the super ends. On the other hand, Overload gives him a damaging AoE aura that shocks all nearby enemies with constant damage from his Life Support unit, only further exacerbating his damage output ontop of everything he already does. Either way, people get chopped.

Everybody dies, but El Bastardo will make certain it's not him, not today. 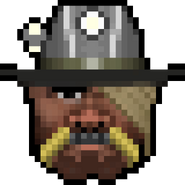