Daemon (pronounced DAY-mon, similar to his real name, not "demon") is a Fighter featured in Bleeding Edge. A self-styled urban ninja out of New York City with an eye for art, a mind for code and a spirit of gold, he is the founder and de facto leader of the "Bleeding Edge" gang and is responsible for the Skeleton Key incident that released vast stores of corporate data and cybernetic schematics onto the black market. After releasing the Skeleton Key as an act of revenge, he formed the Bleeding Edge as atonement, with a desire to make the world a better place and to provide home, support and sanctuary to those like him. To him, Bleeding Edge is family, and he personally helps to foster that sentiment among its members, many of whom he personally recruited.

Generally speaking, Daemon is the game's mascot and, to a certain degree, its protagonist. The Bleeding Edge gang's logo - the stylized clenched fist - is his personal creation.

Raised alone by a loving and artistic mom, Damon’s childhood would abandon him, when his mother died from corporate complications.

Under the new name Daemon, graffiti would be his guide, while the system would relentlessly oppose him. But the fight would give him purpose. He would become a gifted coder, a master of martial arts, and would seek redemption against a system and corporate society that failed him.

He would form a gang of digital misfits called the Bleeding Edge, and unleash the biggest corporate data breach in history.

He had his taste of revenge, and now seeks redemption, as he builds an army of the augmented amidst the underworld fighting circuits.

Daemon is a striker, a burst-damage assassin, with lightning-quick moves and a number of sneaky tricks that let him excel at taking out targets of opportunity quickly. During fights, he prefers a hit-and-run style, to strike from the shadows in an ambush: size up the enemy team to determine who the best targets are, get in, defeat a high-value target (typically a support or another damage dealer, rarely a tank), and get out as quickly as he arrived. Success as Daemon hinges on knowing how to pick his fights, getting value from his crowd control, and knowing and mastering the delicate balance of how and when best to either dive in or back out. Knowing what an enemy is capable of helps determine who to put pressure on and when to use his skills for defense.

Daemon's Graffiti Blade - outside of being a tool of art - is his bread and butter for much of an encounter, cutting his enemies down to size with great damage, speed and style. He wants to be sure his blade strikes true, so he should be aware of the enemy's capabilities to avoid swinging at air. Shift Strike - performed out of his gap-closing (or expanding) Shift dash - is his single hardest-hitting move, moreso when performed out of Stealth, letting him pile damage quickly onto his target(s). Stealth is what allows him to quietly slip in and out of a fight, going "ghost style" and giving him the freedom to move and to either get the drop on an opponent or slip away in the chaos if he needs to regroup; any attack he does out of Stealth deals bonus sneak attack damage, making Stealth even more versatile. If he identifies a secondary target who would be best served not getting involved in a fight (or, really, anyone not on his team in general), he can ambush them from Stealth with Sleep, taking them out of action for a few seconds as long as no one wakes them up in the chaos. Sleep is crucial to get a handle on, as it helps Daemon and his team play the numbers game better than the enemy: Sleep one target, then attack someone else - or attack the sleeping target if he can more fully isolate them from their team. If a target attempts to flee, Shift with Shift Strike helps the urban ninja chase down his quarry. As well, a well-placed Shuriken can slow the target down and maybe even finish them off if they're weak enough; unloading the throwing stars provides good burst damage at range, but since the slow does not stack, spacing Shurikens out will get the most value out of the slow, letting him more effectively run down his foe. Both of Daemon's supers are capable means of piling on damage: Death Mark if you want to more quickly focus down a single target and use it again in immediate sequence if it resets, or Shadow Strike for immediate AoE damage and area denial, especially if comboed with other AoE abilities that ensure it reaches its full potential or as a strong defensive panic button.

Despite his damage output, Daemon tends to have trouble when facing superior numbers or a beefy opponent like a tank without backup. Fortunately, between his high stamina, Wall Jump, Shift (especially when short on stamina), Stealth/Sleep and Shurikens (and even a Shadow Strike as a desperation super), he is very slippery and difficult to pin down, so he should always have an escape route planned if he needs to bug out. Wall Jump in particular is great value for a stamina charge, as in the right place, it lets him break away from pursuers and slip out of sight more quickly than general ground movement would. 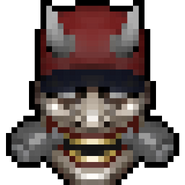