Cass is a Fighter featured in Bleeding Edge. Born to Russian nobility, before she was a former secret agent for the government, before she became a cross between a human and a cyber-cassowary, she once had the talent and aspiration to be a world-class ballerina. Her mother was her inspiration, but her father was a source of secret bioware therapy that made her even more capable. At the age of 12, however, her world was crushed and left in shambles all at once. An operating mistake took her legs and left her paralyzed, before they were replaced with powerful new cyberlegs; the reveal of her bioware therapy and new cyberware to the world took her dreams, tarnishing her reputation and credibility. Finally, the Russian government took her freedom, repurposing her against her will into a human weapon and forcing her to serve for over a decade as a state intelligence and wetwork agent - a spy and assassin. Her mother's death was the spark she needed to reclaim her life and freedom, and so she went rogue and disappeared off the grid. She reemerged in the United States, where she had joined the "Bleeding Edge" gang, finding the solace and sanctuary she required and falling into the arms of the loving family she so desperately needed, even in spite of her aloof and standoffish personality.

A once in a generation dancer from affluent Russian lineage, young Cassandra Lebedeva had a life unlimited. With her Mother as her muse, she grew into expectations as the world’s premiere ballerina phenom.

Despite the risks, her father sought to ensure success and administer unproven bio-tech advancement therapy within his company. His risk was rewarded: enhancing reflexes, agility and sensory processing within the 12-year-old girl.

Miracles unraveled, until a single needle would rob young Cassandra of life as she knew it, and the use of her legs. Cybernetic appendages would replace the paraplegia, but not the disdain, and now her secret was out.

The Russian Government would seize her as an asset, a weapon, to spend the next 14 years as a lethal operative for Russian intelligence.

Her life was no longer hers: but when her Mother came to pass, she was given a gift of clarity. She would take back her stolen life and flee to America, to find family within the Bleeding Edge.

"An agile assassin with a very low health pool who excels at chasing down final kills."

Cass is a flexible assassin who is deadly at all ranges and has unique movement abilities that not only make it easier for her to get around but also get the drop on enemies and take them out quickly with her elegant dance of death. With next-to-no crowd control and one of the smallest health pools in the game, she must be particularly cautious in choosing her engagements, balancing when to pressure and when to fall back in any given situation. She compensates for her lack of health by being, for all practical purposes, the fastest character in the game. Cass particularly excels as the proverbial clean-up crew who circles like a vulture (or cassowary, as it were) for stragglers and weakened targets, and runs them down to finish them off.

As one of the few hybrid characters, Cass has both melee and ranged basic attacks available to her, meaning she is fully capable at all ranges. Her ranged Feathered Darts throws fans of darts at a target, harrassing for damage at a safe range and picking off targets who try to use their dodges and gap expanders to get away from her. Her Rake melee combo uses her powerful legs and wicked talons to tear up anyone she gets close to with considerable damage. It's common to see her use a Rake combo to knock an enemy away, and follow up with Feathered Darts as she closes the gap to Rake them again.

Everything else Cass has builds on her unique form of mobility, offering multiple ways to engage or disengage a target. While she can't use a hoverboard, her Momentum passive lets her build up speed as she runs until she's naturally as fast as (perhaps faster than) a hoverboard, meaning she can naturally chase down or run away from anything without spending time to mount up for increased speed and without risk of being dismounted. This works in tandem with her Charge Jump, which lets her power up a super jump that gives her major vertical height, great for getting to high ground to either escape or quickly follow anyone who gets the same idea to use elevation for safety. Her Swoop gives her multiple dashes that damage and pass through enemies; she can Swoop to engage, disengage, reposition, use as a combo extender, finish off a target with a burst of damage, and other sorts of utility. Hightail is a hard disengage, leaping high and away to escape an aggressor and leaving a damaging fan of darts behind for their trouble. Despite having only average stamina, Cass's wide raft of movement tools (combined with her flexible means of doing basic damage) makes her better able to choose an engagement on her terms. This is somewhat compounded by her supers, which give her unique movement and damage opportunities. Dive Bomb has her leap into the air and pounce on whoever she wants in a very wide area, good for safe repositioning, causing havoc during a team fight, or chasing down someone trying to escape her deadly talons. Blade Dance, while less mobile, provides lots of continuous AoE damage, throwing an unending fan of knives in all directions as she twirls the deadliest of pirouettes, great during a team fight for a massive influx of damage and discouraging an enemy team from getting near her. 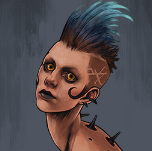 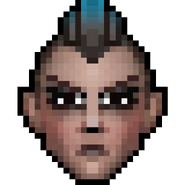