Buttercup is a Fighter featured in Bleeding Edge. A big-bodied, big-hearted Cajun motorcyle enthusiast with a religious background, she lost her legs in a vehicle accident. Falling into despair at the thought of never riding again, she discovered the world of black market cyberware, and with it, a way to ride in the saddle once again. She knew she couldn't return to her community for her choice, despite their previous unending support for her, so she was forced to leave home behind. Hitting the road, she became a drifter and one-woman biker outlaw, with a long rapsheet and numerous warrants out for her arrest. With the Skeleton Key's release and vastly more cybernetics on the black market, she turned herself into a true human motorcycle. She is one of the earliest known recruits to the "Bleeding Edge" gang, joining up and making her new home and family as thanks for helping her rediscover her passion when she thought it lost forever.

"A survivable front-liner who can pull enemies in and slash at them with her buzz-blades."

Buttercup is a big-body mobile tank who works well at disruption, area control and punching holes in enemy lines. With her Yank, Launch and Power Slide, she can bodily force enemies out of position or further punish an enemy already out of position. Yank, in particular, is a powerful tool to force an issue, hooking a target of opportunity into her team for them to pile on. Her Oil Slick further compounds the issue, serving as a major hassle in the middle of a pitched team fight or ensuring a snagged enemy doesn't get the chance to get away. Whip Lash serves much of a similar purpose as Oil Slick, replacing crowd control with AoE damage and letting her chip in to the overall damage her team does in a fight. If she needs to beat a retreat, Burl lets her duck out at speed and also recover some health in the process to keep her alive. The health regeneration from Burl is one of her only real means of mitigation or self-recovery, but she makes up for that by having the largest native health pool in the game (tied with Makutu). Both of her supers only exacerbate how much trouble she can make for an enemy team. Burnout is hard, albeit temporary, area denial with its large, damaging AoE knockback, good for cutting off an enemy's approach and even securing a kill if she needs to; Turbo Charged pushes her into overdrive and makes her even tougher in a pitched fight with boosted damage and health and the lifesteal to complement both. 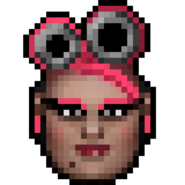 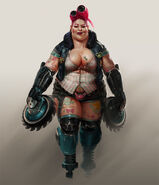